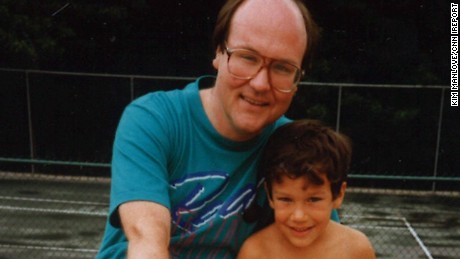 (CNN)The summer of 2001, Kim Manlove was hopeful that his 16-year-old son David had turned a corner in his recovery from drugs and alcohol.

David had been in treatment for six months at a center near their Indiana home, where he attended therapy sessions, openly acknowledged he had a problem and went to 12-step meetings. By June, he had found a job and was trying to win back his parents’ trust.
But the urge to get high was too powerful. For weeks, it turned out, the teen had been inhaling computer-dusting spray, a toxin that didn’t show up on drug screens.
He and his friends had read that inhaling the spray while underwater intensified the rush. On June 9, 2001, they passed the can back and forth, taking turns diving under the surface in a friend’s backyard pool while huffing. After the third or fourth time, Dave didn’t come back up. The official coroner’s report said the cause of death was drowning, brought on by sudden sniffing death syndrome.

In the months after David’s death, Manlove and his wife, Marissa, began sharing their son’s story, determined to help other parents get their children into treatment. They worked closely with the Fairbanks treatment center in Indianapolis, where David had been treated, and for whom they had no blame, and started a parent support group that they facilitate to this day. David was the first adolescent the center had lost while still in treatment.
But privately, the grief and guilt were too much to bear for the father.
“I desperately wanted to cling to every aspect of his being. I was so blinded by my grief that I was incapable of being able to see beyond the sudden and seemingly irrevocable absence of his physical presence. The touch of his hand, his breath on my cheek, the sounds of his voice … all were my constant companions,” Manlove wrote on CNN iReport. “I railed against the powers that be for ‘taking him away’ from me.”
Soon, that desperation led Manlove into his own spiral of substance abuse. Addiction was in the family. He had had one uncle with an alcohol problem who took his own life, and another uncle who died early due to the effects of alcohol. Manlove, an administrator at Indiana University for more than 20 years, loved scotch, wine and beer, and overdid it periodically, but thought he had found a balance, until David’s death.
A doctor prescribed Xanax for the grieving father’s depression. Manlove began abusing it to the point that he was visiting multiple doctors for prescriptions. He kept a copy of his son’s obituary in his wallet to get more pills. He took a sabbatical from his university because of the grief, but that just gave him an opportunity to use more.
“Two years after he died, I was drinking a quart of tequila a day and I was taking probably at least a couple weeks’ worth of Xanax in two or three days,” he said. “I could drink and use all the time, then try to pull myself together when everyone would come home.”
In August 2003, his wife and older son came home to find him in an incoherent blackout, babbling about his losing David and wanting to take his own life. When he came out of it, they were screaming, “What’s wrong with you?”
“It was at that point I just said, ‘I am having trouble. I need help. I think I need to go to treatment as well.'” He knew where he wanted to go.
While being treated at Fairbanks, the father sat in the same chairs his son had been in.

Manlove underwent a full course of treatment at Fairbanks, including inpatient, partial hospitalization and intensive outpatient therapy. The first couple of days, he wandered from meeting to meeting, still detoxing. On the third day, he had an epiphany that would change the course of his life.
“Some former patients came in, and in the course of conversation, I heard one of the guys talk about ‘a higher power of your own understanding.’ That piqued my interest a little bit and I went and talked to him afterward. I told him what had happened to me and Dave. He said, ‘Instead of using your son as a reason to drink and drug yourself to death, why not consider making him part of your higher power, as a reason not to do that.'”
Back in his room, Manlove, who had turned his back on religion, was flooded with a feeling of peace.
“I had the best sleep I’d had in probably more than a year, and I realized, at least I thought, I’ve had a spiritual experience. From then on, it just kind of opened everything up and I made the conscious decision that when I talk to my higher power now, I talk to Dave.”
While Manlove was going to 12-step meetings, his wife, Marissa, was on her own journey of recovery, attending Al-Anon meetings for family members of addicts.

From addict to advocate

In the 14 years since David’s death and Manlove’s own addiction and recovery, the couple has devoted their lives to helping other families, advocating for more evidence-based treatment and more training and support for other parents. In 2006, they started a private foundation called the 24 Group, which awards small grants to addiction and treatment recovery providers in central Indiana.
Related: Mother who lost mentally ill addicted son: The system is ‘broken’
They helped create a charter public high school in Indianapolis specifically for students in recovery, for which Marissa still serves on the board. Meanwhile, Manlove left his career in academia to advocate for people in recovery full time. He started by taking a job at the same center that had treated him and his son. He is now director of the Indiana Addiction Issues Coalition.
“I make less money than I did before, and yet couldn’t be happier and more fulfilled,” he said. “Who would have thought that addiction could enrich a person’s life, but in some ways, it transformed it because we look at the world differently today, and it’s through a lens of extraordinary gratitude for what has been, what has happened and what we have now.”
Tom Hedrick, a co-founder of the Partnership for Drug-Free Kids (formerly the Partnership for a Drug-Free America), said Manlove and his wife have been instrumental in the national addiction recovery movement. They’ve helped that organization develop resources for parents and teens and serve as trained parent peer coaches for families who are struggling.
Not many parents, especially fathers, are willing to tackle the stigma that still surrounds addiction and accept that it is not their fault, Hedrick said.”We are so desperate for parents in general and fathers in particular to know that they’re not alone… your child is not bad, your child has a disease and you need to get help for your family, for your child, to treat the disease.”
The fact that Manlove brings his direct experience of recovery, along with the perspective of a parent who lost a child, makes him even more valuable to the movement.
On October 4, the Manloves will join thousands of other families in a Washington, D.C. march, “Unite to Face Addiction.” It’s being organized by the nonprofit Facing Addiction, which supports solutions “that are based on science and compassion, not stigma and shame.”
“We’ve been in the shadows for too long,” Manlove said. “If we really accept that addiction is a chronic medical disease like cancer and hypertension…we’ve got to start putting a face on recovery the way people have done with other types of disease.”
Amazingly enough, Manlove said, after experiencing what often is described as the worst loss a person can endure, he and his wife feel vastly enriched since David’s death, and more connected to each other — and their son — than ever.
“We not only honor his struggle, but we honor his life, and we continue to celebrate it in wonderful ways that keep him close to us in ways we could never have possibly imagined,” he said. “Finally, today I have hope, joy and gratitude for the continued presence of my son who has, and is, showing me not only the path for recovery from my own addiction but to new understandings and appreciation of life.”