I’m standing on a podium, my face projected on to a gigantic screen, delivering the most controversial speech of my life. At a summit in Northern Ireland in front of 600 people, including several high-profile political figures, it’s my job to urge the country to follow in the Republic of Ireland’s footsteps and legalise gay marriage. Half the room gives me a standing ovation; the other half walks out. I don’t care. My desire to fight unfairness beats any fear or trepidation and I feel triumphant. You would never guess that just an hour earlier, I was having a panic attack.

When I tell people I suffer with anxiety, their reaction is always the same: but you’re so confident. It’s difficult to explain why panic attacks don’t affect my assertiveness, or the ability to speak in public, do live television and all the other things my career as a social entrepreneur and activist entails. I didn’t even have one when my opinions recently got me into professional trouble – I was dropped from my role as the Government’s mental health champion for schools after criticising education policies. 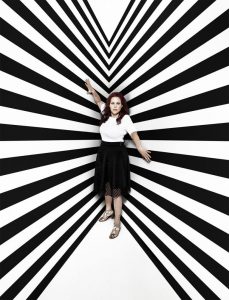 While my panic attacks do become more chronic and frequent when I am overworked, they’re set off by smaller, simpler things – an ambiguous text message from a friend that might mean they’re angry with me, a stiff toilet door handle causing me to be momentarily trapped in the cubicle, someone standing too close to me, or talking too loudly into their phone.

According to the charity Anxiety UK, I’m not alone. CEO Nicky Lidbetter tells me that a large proportion of the people approaching them for support are professional women in their twenties and thirties. She says the reasons cited “include workplace anxiety, social pressures, financial struggles, academic stressors and family worries”. One recent study that analysed three years’ worth of data involving 100,000 employees found that there was a 74% increase in employees reporting cases of anxiety.*

I first had an attack when I was 15 and was away on a school trip to Rome. I thought I’d lost my purse and remember running frantically around the unfamiliar city centre, vision blurry and struggling for breath. I didn’t know what a panic attack was back then, which made the experience all the more terrifying because I assumed I was dying. Since then, I’ve had cognitive behavioural therapy (CBT), and during my twenties the attacks stopped. But now I’m in my thirties and panic has, without warning, reared its head again.

If I’m lucky, I’m able to draw on the CBT and mindfulness techniques I’ve learned when I feel the stirrings of an attack. I breathe slowly, head forward, repeating reassuring mantras, ‘anchoring’ myself to the moment. Nine times out of 10, I find the attack will pass.

My fiancé now knows when I’m in a downward anxiety spiral. He says I become uncharacteristically quiet and stare intensely at one spot in the middle distance. My breathing becomes louder, but sounds shallow, like it is coming from my throat as opposed to my chest.

Occasionally, a full-scale attack takes hold. You know that moment when you realise you’re definitely going to have an orgasm? When you’ve boarded the pleasure roller coaster and all you have to do is wait as you speed towards the summit? Well, having a panic attack is a bit like that. There’s a point where you reconcile yourself to the fact it’s going to happen and there’s nothing you can do to stop it.

IT MAKES ME FEEL COMPLETELY HELPLESS
It is that feeling of complete helplessness which is, for me, ‡the worst aspect of anxiety. I often hyperventilate. I’m usually a tactile person, but when people around me instinctively want to stroke my back, it causes me to jerk with feelings of claustrophobia. They’ll also urge me to “breathe” until I’m overtaken by waves of irrational anger and want to shout at them that that’s the one thing I’m incapable of doing. Then come feelings of light-headedness, followed by tears. After a panic attack, I always sob violently, as though to exorcise all the emotion of the preceding few minutes.

According to doctor and writer Adam Kay, my symptoms are absolutely textbook. “The brain has told the body that it is in danger,” explains Dr Kay, “and activates the sympathetic nervous system. Heart rate increases, as well as the strength of each heartbeat, which oxygenates the blood to provide strength to your muscles so that they have the power to run away: you’re in the grip of the fight-or-flight response. The lungs dilate and blood is diverted away from the brain and into the body, which is why you’re unable to think clearly.” Hyperventilating, Dr Kay tells me, alters the balance between acid and alkaline in the blood, which causes light-headedness, blurred vision and sometimes tingling inthe fingers and the toes.

Physiologically, panic attacks are “the body ‡preparing for a threat that isn’t actually there”. Back in Fred Flintstone’s day, when our ability to survive depended upon escaping or battling predators with stone weapons, our “fight-or-flight mode” was activated by the sympathetic nervous system (which regulates our instincts – things we do without thinking, and therefore have no control over) whenever we were in danger. In 2016, hungry wildebeests have been replaced by other stressors: pressures at work, at home, and the “always on” nature of everyday life; and because we can’t run, we panic.

Anxiety is the epidemic facing Generation Y (those born between 1980 and 2000). Women in their twenties and thirties have never had so much choice, and we’ve been enthusiastically smashing the glass ceiling and achieving things our mothers could only have dreamed of. In recent years, a lot of experts have cited the increasingly fast-paced nature of modern life, or the added pressures created by social media, as reasons for spiralling anxiety. Some neuroscientists have even claimed that prolific use of social-media has changed the way that our brains would naturally develop, leading to an increased compulsion to compare ourselves with others. While I can understand their arguments in theory, they don’t resonate with me. I enjoy being busy and thrive on a challenge. I don’t believe my mental health would be improved if I was at home all day baking scones in a pinny (and then resisting the urge to post pictures of them on Instagram).

Dr Pooky Knightsmith, an expert member at the National Institute of Health Research, tells me that she thinks the surge in panic attacks among professional women has more to do with the pressure to appear as though we aren’t struggling, while achieving more than any other generation of women. Projecting this “perfect” version of ourselves, warns Knightsmith, can lead us to internalise our problems.

“Not talking about issues as they’re arising means they build up until they become unmanageable,” she explains. “So our mental health is a bit like a pot on the stove – it’s easy to control if we take action early, but if we leave it too long, then it will boil over and become destructive.”

Knightsmith’s analysis resonates. As a child I was taught that when asked, “How are you?” I should respond with “I’m great, thanks’,” and shouldn’t ever moan or “feel sorry for myself”. This is a template I’ve applied to all my social and professional interactions since. My best friend often says to me, “It’s OK if you’re not OK, you know,” because she can sense there is something I’m not telling her. While being stoic is often seen as a masculine trait, I know many women who try to mask their struggles because they fear appearing weak, and who believe everyone else is coping better than they are.

Then, of course, there is the shame, which is as real and palpable as the panic attack itself. I hid my attacks for a long time because I thought people would view me as less competent. Acknowledging that we’re struggling to cope is the final taboo for women at the top of their game.

Knightsmith agrees. “We talk a lot about how men don’t discuss their problems, but I wonder how much a certain type of woman avoids talking about them, too,” she says. “We all try to appear to be managing seamlessly and we observe our friends doing the same.” It’s a vicious cycle and I’m as guilty as anyone else. Emotions are like traffic lights. If you deal with something stressful when it first happens, then you are still on ‘green’ and you can move forward and get on with your day. If we try to suppress our feelings, they don’t simply disappear, they fester and become red, leading to a drunken outburst, irrational anger or, in my case, a panic attack. We need to realise that honest communication about day-to-day challenges is a sign of strength, rather than weakness – so I’m coming out of the anxiety closet. I’m a professional woman and I get panic attacks. Who’s with me?

This article originally appeared in the August issue of Cosmopolitan, on sale now.

Panic attacks can lead to phobias if left untreated. Phobias are a type of anxiety about a specific object or experience, such as snakes, heights, flying, enclosed spaces, etc. It’s a phobia when you worry about it all the time, or thinking about it makes you miserable, or unable to function.

America’s relationship with its mentally ill population continues to suffer as a result of inadequacies in the country’s mental health care system.

For the mentally ill in Chicago, the effects of this inadequacy are felt on a magnified scale, as budget cuts and a lack of community-based mental health resources have left these individuals with minimal support. More often than not, this means being repeatedly swept up into the criminal justice system for low-level, non-violent crimes

VICE News takes an immersive look at this issue by going inside the Cook County Jail and speaking with community members on Chicago's south side.

Read "Chicagoans Are Stopped and Frisked by Police Even More Than New Yorkers” - http://bit.ly/1F6OvNV

Do You Have These Panic Attack Symptoms?

Short And Long Term Effects Of Depression – Get The Facts