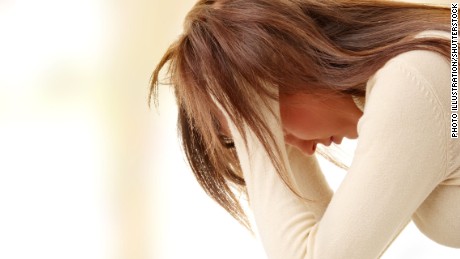 (CNN)One moment she’s dolled up, smiling effortlessly toward the camera. The next she’s in bed, in tears, just trying to calm down.

When a panic attack strikes, Amber Smith’s world stops. The Rugby, England, resident posted photos on Facebook last week to show how dramatic a panic attack can alter not only a person’s emotional state, but their physical state as well.
“I’ve been battling with anxiety and depression for years and years and there’s still people that make comments like, ‘You’ll get over it; you don’t need tablets; just be happier; you’re too young to suffer with that,” Smith wrote in a post, which more than 16,000 people shared online.
Smith is one of the millions of people worldwide suffering from a mental health disorder. Between 1990 and 2013, the number of people suffering from depression or anxiety, two of the most common mental disorders, increased by nearly 50%, from 416 million to 615 million globally, according to the World Health Organization (WHO).
Although that figure is climbing, investing in treatment could lead to healthier people, and even healthier economies.
For every U.S. dollar invested in treating depression and anxiety, there was a $4 return in better health and ability to work, according to a new WHO-led study published Tuesday in The Lancet Psychiatry.
The study is the first to argue that there are global economic benefits in investing in treatments for depression and anxiety.
“We know that treatment of depression and anxiety makes good sense for health and well-being; this new study confirms that it makes sound economic sense, too,” said Margaret Chan, director-general of WHO in a statement.
“We must now find ways to make sure that access to mental health services becomes a reality for all men, women and children, wherever they live,” Chan said.
The study calculated estimated treatment costs and health outcomes in 36 nations countries from 2016 to 2030.
If the United States scaled up its cost of treatment, it would cost the United States about $147 billion. But the return would outweigh the expense, according to the report.
There would be a 5% improvement in worker participation and productivity, which is valued at $399 billion. The improved health adds another $310 billion in returns, more than doubling on the government’s return on investment.
However, the investment in mental health care is far lower. WHO’s Mental Health Atlas 2014 survey found governments that spend an average 3% of their health budgets on mental health. Poorer nations tended to spend less than 1%, while wealthier countries spend 5%.
Humanitarian emergencies and ongoing conflict add further to the need for scale-up of treatment options. WHO estimates that, during emergencies, as many as 1 in 5 people are affected by depression and anxiety.
Mental disorders remain in the shadows in many parts of world, according to Jim Yong Kim, president of the World Bank Group. “This is not just a public health issue — it’s a development issue. We need to act now because the lost productivity is something the global economy simply cannot afford,” he said in a statement.

As for Smith, she wants the stigma toward people with anxiety to end.
“People that think that because I physically look ‘fine’ that I’m not battling a monster inside my head every single day,” she writes.
And she urges those suffering alone to reach out for help and support.
“The more awareness there is, the less people will suffer in silence,” Smith writes.